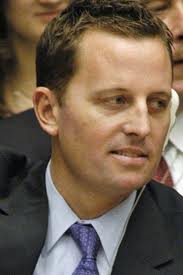 He has lived with his partner, Matt Lashey, for the past nine years, and is a frequent advocate for Republicans and gays. Which is why this pick is interesting. For Romney to have an openly gay spokesman is a real outreach to gay Republicans, a subtle signal to moderates, and the Santorum faction's reaction will be worth noting.

Grenell served through September 2008 in the Bush administration as a spokesman to the U.S. ambassador to the United Nations — and told The Advocate's Kerry Eleveld as he left the administration that it was his hope that New York would have marriage equality soon and that he would one day be able to marry his partner, Matt Lashey. The couple has been together 10 years.

Log Cabin Republicans executive director R. Clarke Cooper, who also served in the Bush administration, tells Metro Weekly that Grenell will be "a tremendous asset" to the Romney campaign.

"Having served with Ric," Cooper says, "I can attest that his experience in the multi-lateral environment of the UN and familiarity with domestic and international media make Ric a strong voice."

And Kren Ocamb sees a shift:

Rachel Maddow called it! Wednesday night she wondered why Republican presidential frontrunner Mitt Romney delivered what was billed as a major talk in North Carolina – and never mentioned the antigay Amendment One on that state’s May 8 ballot. Mark this day, April 18, as the day Romney pivots to appeal to mainstream voters for the general election.