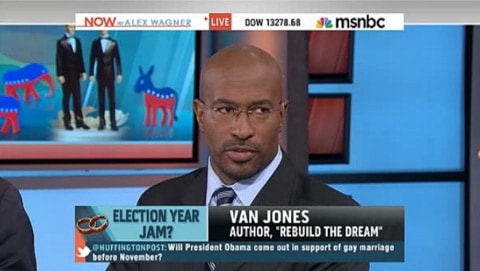 Legal Director for HRC Brian Moulton and former White House advisor Van Jones joined MSNBC's Alex Wagner to talk about the GOP backing off of same-sex marriage as an issue, and whether or not Obama will come out for marriage equality under pressure from Democrats and LGBT rights groups.

“I think if President Obama came out as gay he wouldn’t…President Obama is not going to lose the black vote no matter what he does. I don’t understand this particular strategy. Certainly, our numbers are a little bit more — because we’re more religious as a community — a little bit softer on some of this stuff, but it’s not a hardcore issue for that many African Americans. I don’t even understand the argument that gay marriage is a threat to marriage. It’s not like there is some [thinking that] if the gay people get married then the heterosexual people gotta get divorced. [Or] There is some shortage of marriage. [Or] They’re (gay people) are trying to come and get all the marriage that’s left. It’s just kind of nuts. You can play to that sentiment, but I don’t think it shows up at the ballot box at all."

Wagner asks Moulton why Obama doesn't just come out then. Adds Moulton: "We hope that he would evolve on this issue soon."

Previous Post: « Towleroad Guide to the Tube #1096
Next Post: Children of Gay Parents Bullied on ‘What Would You Do?’ – VIDEO »