Greg Sargent at The Plum Line looks at this week's announcement from the White House that Obama won't be signing an LGBT non-discrimination executive order in the near future and accusations that it was "a political move to fend off criticism from right-wingers who will never support him anyway." 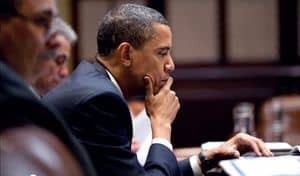 But it does seem clear that the White House needs to figure out how it’s going to handle these issues — Obama and his advisers are coming across as too cute by half here.

There’s no denying that Obama and his advisers have a very good overall record on gay rights. But on this issue, and on gay marriage — two hugely important topics to the gay community — there’s too little clarity and too much of a whiff of excuse-making and political calculation.

Obama is trapped in a difficult dynamic that is in some ways the product of having done the right thing in other areas involving gay rights. Because of his real accomplishments in those areas, gay advocates are fully convinced he really believes in full equality for gay and lesbian Americans — and only grow angrier and more impatient when he hedges or equivocates on key issues. I can see why White House advisers would find this dynamic frustrating, but the simple truth is that it isn’t going away until he stops doing it.

Previous Post: « Maggie Gallagher: Whether I’m Married or Not is Irrelevant
Next Post: Joseph Gordon-Levitt is Bruce Willis When He Grows Up: VIDEO »