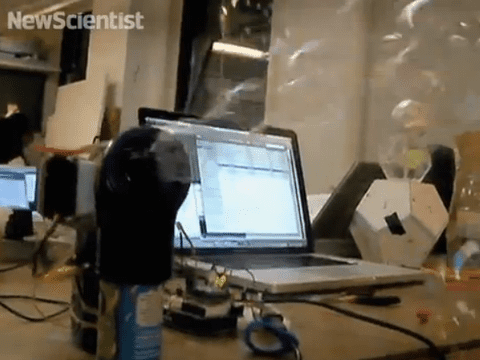 Not content with having his email confined to his inbox, New York-based designer Ted Hayes connected his computer to a bubble gun that goes off whenever he receives an email.

Of course it’s more complicated than just that, as New Scientist explains:

Creating the system required moderate programming and electronics knowledge. A microcontroller uses a radio module to wirelessly connect to a web server to check a script that gets updated when an email is received. If there are new messages, the microcontroller engages two actuators that emit bubbles. One of them is a relay that switches on a motor while a servo moves a bubble-blowing loop in place.

The simple project is just one example of a growing movement to connect physical objects to the web, creating an “Internet of things”. Electronics hobbyists have already built more complex systems, such as an automated network in a home that allows lights, gates and doors to be controlled from a web site. However, pre-programmed devices could soon allow novices to take part as well by decreasing the amount of expertise required.

For his part, Hayes told the site, “I like the idea of physically manifesting otherwise ephemeral electronic information.” Hmmm. Didn’t Manhunt do that already?

Watch video of Hayes’ contraption in action, AFTER THE JUMP.