The special session called last week by Governor John Hickenlooper after Republican House Speaker Frank McNulty successfully stalled the civil union bill in Colorado concluded in another successful attempt by the House GOP to kill the bill after it was sent to a committee last night which sent it packing:

The bill's demise was expected by Democrats, who have begun using the issue as a rallying cry to topple Republicans in the November elections. Republicans assigned the bill to House State, Veterans and Military Affairs Committee, which was likely to reject it. The panel voted 5-4 along party lines to kill the measure.

"The gay community is being used as a political pawn," said Republican Rep. Don Coram, whose son is gay. Coram voted against the measure.

Watch Colorado Rep Mark Ferrandino's formal statement to the media following the death of his civil unions bill in The House State, Veterans, and Military affairs Committee last night, AFTER THE JUMP… 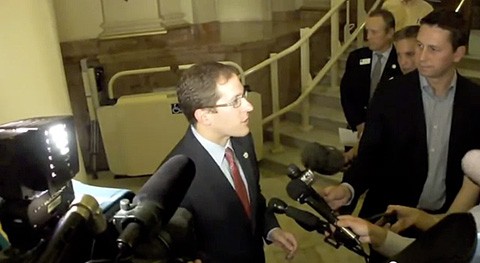