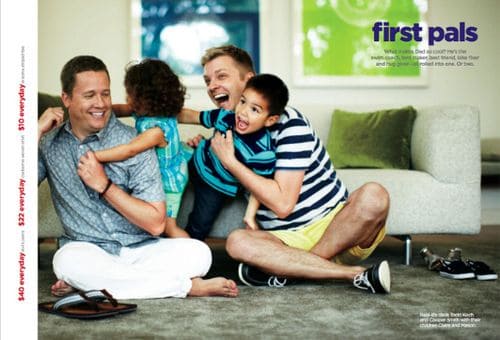 The group One Million Moms released the obligatory press release decrying JC Penney for featuring real-life gay dads in their most recent catalog.

Describing themselves as 'disturbed,' the group again vowed to keep fighting the gay-friendly retailer. "Our persistence will pay off!" they declare in their press release, which also insists JCP "would rather take sides than remain neutral in the culture war."

It is obvious that JCP would rather take sides than remain neutral in the culture war. JCP will hear from the other side so they need to hear from us as well. Our persistence will pay off! One day we will answer for our actions or lack of them. We must remain diligent and stand up for Biblical values and truth. Scripture says multiple times that homosexuality is wrong, and God will not tolerate this sinful nature.

In addition to again urging their supporters to call and write to JC Penney, OMM also asks them to return any unsolicited catalogs that may come their way. "If they receive an onslaught of their returned magazines, they will take notice."

Despite these frequent calls to action, JC Penney has remained steadfast in their commitment to equality.

Previous Post: « Is This Flier Asking Straight Men On Gay Play Date A Joke?
Next Post: Watch The New Trailer For ‘The Bourne Legacy:’ VIDEO »