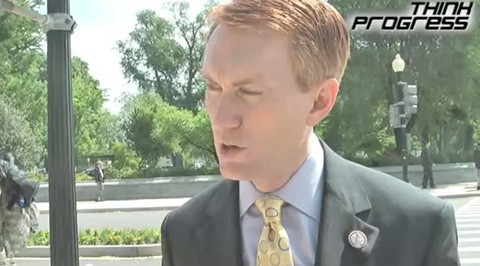 Think Progress caught up with GOP Oklahoma Rep. James Lankford on Capitol Hill last week and asked him if he would support legislation that prohibits firing someone from their job because of their sexual orientation.

Well, you’re now dealing with behavior and I’m trying to figure out exactly what you’re trying to mean by that. Because you’re dealing with — race and sexual preferences are two different things. One is a behavior-related and preference-related and one is something inherently — skin color, something obvious, that kind of stuff. You don’t walk up to someone on the street and look at them and say, “Gay or straight?”

Lankford, you see, doesn't believe someone is born gay: