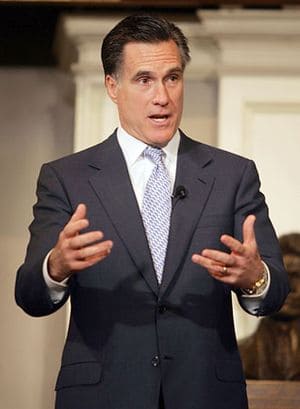 Sorry for the double-dose of Mitt. This is apparently the week for presidents, would-be presidents, and gaystuff.

Check out this astounding bit of political softshoe from the Republican nominee-apparent: On Thursday, Mitt said of gay couples adopting children:

… if two people of the same gender want to live together, want to have a loving relationship, or even to adopt a child — in my state individuals of the same sex were able to adopt children. In my view, that's something that people have a right to do.

So — in Mitt's "view," gay people have the right to adopt. That sounds like a statement of opinion — that things ought to be a certain way. The rest of Mitt's statement seems to express his satisfaction that state legislators have concurred with his opinion.

But on Friday, in an interview with Charlotte's WCTV, Mitt backpedaled:

This is what's so cringemaking about Mitt's speeches and interviews. He crafts his public utterances to obfuscate, not to clarify. What that suggests about his faith in the listening and voting public — or about his own faith in his abiiity to appeal to that public — is debatable. Whatever it is, it can't be good.

(Incidentally, Mitt's wrong. It's not "all states but one" that allow gay adoption. It's all states but two. Mitt was probably thinking of Utah; the other outlier is Mississippi.)