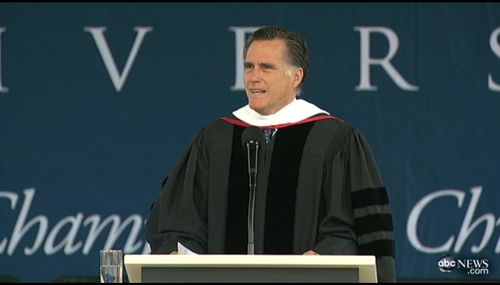 The man's just not a very good speaker. Smarmy. Sitting through this video's not fun. (His very first line is a joke at the expense of President Obama, written so poorly and told so awkwardly that nobody in the audience seems to get it.)

If you do sit through this video, bear in mind what's going on: This is the certain Republican nominee for the American presidency delivering the commencement address at the school founded by Jerry Falwell, who blamed 9/11 not on religious fundamentalism, but on gayfolk, lesbians, "abortionists," and pagans (and about whom Romney has several nice things to say), and which canceled its participation in last year's CPAC because GOProud would be there. Viva liberty!

Weirdly, it's also a school that hosts a class on comparative religion, which includes instruction on the heresies of Mormonism.

As one might expect, Romney's commencement address drew a rather tepid reaction from the crowd. His biggest applause line:

Marriage is between one man and one woman!

(UPDATE: The video below cuts off the very beginning of Mitt's speech, in which he praises the vaguely anti-gay founder of Chick-fil-A, Truett Cathy. A full transcript may be found here.)