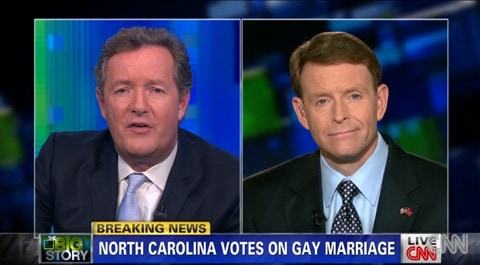 Piers Morgan invites hate group leader Tony Perkins on to talk about the North Carolina Amendment vote and asks him what he would do if one of his kids turned out to be gay. Perkins doubts that would happen because he's teaching them the right things (and then CNN helpfully cuts the interview off).

Morgan also asks Perkins how a gay couple wanting to be married damages society and Perkins hides his hate behind a bunch of policy nonsense-speak, trying to butter up Piers by telling him what great questions he's asking.

I'll post a longer clip if I can locate it.