Here's the cover of the new Newsweek: 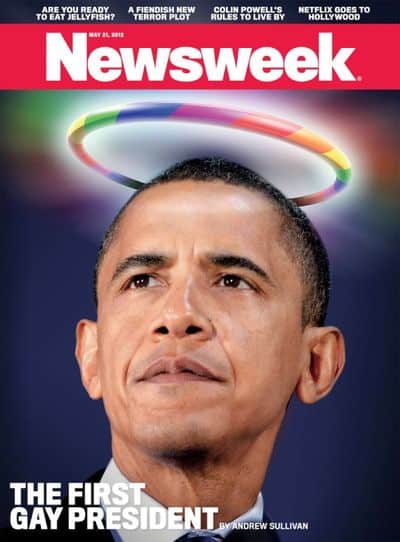 The headline tries for wit in its unsubtle recollection of a profile of Bill Clinton authored by Toni Morrison, entitled "Clinton as the First Black President," which appeared in the New Yorker in 1998. In it, Morrison wrote:

Years ago, in the middle of the Whitewater investigation, one heard the first murmurs: white skin notwithstanding, this is our first black President. Blacker than any black person who could ever be elected in our children's lifetime. After all, Clinton displays almost every trope of blackness: single-parent household, born poor, working-class, saxophone-playing, McDonald's-and-junk-food loving boy from Arkansas.

Andrew Sullivan's Newsweek story has yet to be posted to the web, so there's no telling if he's written similarly of Barack Obama. Hard to imagine he would. I'm pretty sure Obama's never "displayed" any gay "tropes," if such things exist at all.