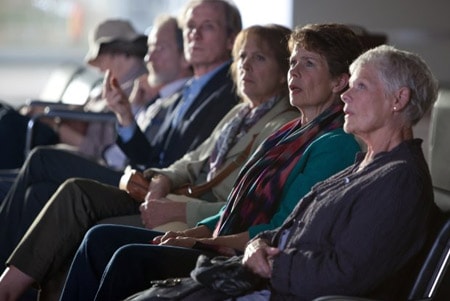 Though some media pundits scoffed last weekend when THE BEST EXOTIC MARIGOLD HOTEL opened for business the same weekend as The Avengers (previously reviewed) it turned out to be a savvy move. Where else were the spandex averse or Downton Abbey addicts to go? (Rather perversely, The Best Exotic Marigold Hotel denies Abbey addicts additional showdowns between Lady Crawley and the Dowager Countess; Penelope Wilton and Maggie Smith's stories don't intertwine much) In fact, this British retirees in India dramedy should have opened even wider since they had the nation's second best per screen average and could have cracked the top ten with far fewer theaters than the other movies.

But enough about money. Hotel manager Sonny  (Slumdog Millionaire's Dev Patel) is a dreamer, not a businessman. His family is losing patience with his dream and time is running out for the hotel. It's running out for the guests, too, as they near the end of their lives. The name of Sonny's establishment is actually “The Best Exotic Marigold Hotel for Elderly and Beautiful People”. The movie's title lops off those last five words which only proves Sonny's business model's point: he believes that countries don't care about their elderly so he'll outsource old age. Come to India and live out your autumn years!

Would you rent a room from Dev Patel? MORE AFTER THE JUMP… 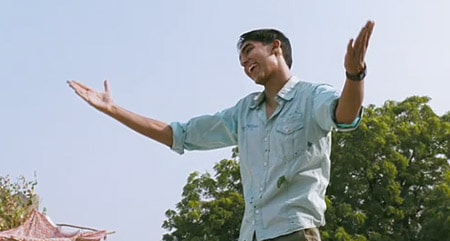 The film begins by introducing us to each of its characters in mini-chapter form. In quick succession we meet seven Brits with one "issue" a piece beyond the financial problems driving them to a foreign country: Evelyn (Oscar winner Dame Judi Dench) has lost her husband and realizes she's never worked in her life; Douglas (Bill Nighy from Notes on a Scandal) and Jean (Penelope Wilton from Downton Abbey) have an obviously unhappy marriage — he's chill, she's uptight; Norman the womanizer (the aptly named Ronald Pickup) is quite lonely; Madge (Celia Imrie) is also lonely and wants to marry a rich man; Muriel (Oscar winner Dame Maggie Smith) is racist and feels useless; and Graham (Oscar nominee Tom Wilkinson) retires suddenly. Graham's "issue" the movie withholds for awhile but something is drawing him to India. 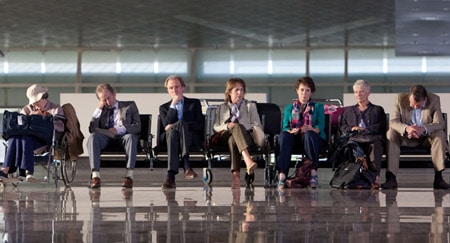 So off they go to "The Best Exotic Marigold Hotel" which is not at all what they were expecting. The Best Exotic Marigold Hotel, on the other hand, is exactly the kind of movie you expect. It's not that there are no surprises in its juggling of seven to ten separate story threads but that it always moves in the same general direction and pace and tone for each of them. The screenplay gives you two handfuls of neatly packaged problems and it keeps telling you, through Sonny's favorite saying, that it will resolve them all.

"Everything will be all right in the end. So if it's not all right, it's not the end."

In one recurring gag Muriel is terrified to eat anything in India "If I can't pronounce it, I don't want to eat it." but she should rest assured that the only thing this movie is serving is comfort food. 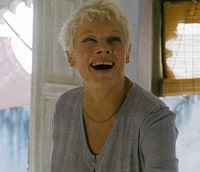 This is not to say that there is no depth or pleasure. The actors are strong enough to elevate the light material and some of the performance notes sting when they should (Maggie to the rescue!) . One of the storylines in particular will interest gay audiences and there are solid warm laughs sprinkled in. Dench, who is the central character despite the ensemble structure, does her best work since Notes on a Scandal… (though she's nowhere near that brilliant). But unfortunately the movie isn't strong enough to sustain it's two hour plus running time as it moves through its problem resolving final act, checking off its story boxes one-by-one.

I went, as I imagine many people will, for some Quality Dame Time and I got it so I shouldn't complain. But my mind was truly wandering. It wasn't just Downton Abbey Season 3 anxiety distracting me in that final third. Hey, that's Notes on a Scandal's Barbara giggling and glowing when paired off with her beloved Sheba's husband Bill Nighy!? That is so wrong. Hey, why didn't they reunite both Slumdog stars for Sonny's B plot romance?  As everything became all right in the end, I'd long since checked out of the Marigold Hotel and had created an elaborate television fantasy instead wherein Dames and BFFs Judi & Maggie had their own daily reality show where they gossiped about Hollywood, James Bond, Harry Potter and the West End over tea. Judi uses sweetener but Maggie likes hers bitter.

Wouldn't you DVR the hell out of that? 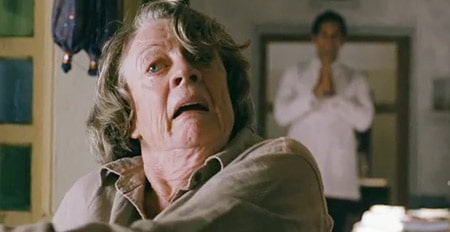