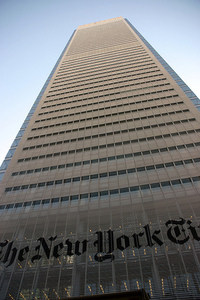 The New York Times' editorial board today celebrated recent news that Dr. Robert Spitzer, a psychiatrist whose work has helped fuel the "ex-gay movement," had admitted his studies were flawed, misleading and dangerous.

[Spitzer] has now renounced a study he did a decade ago that suggested that “reparative therapy” can help homosexuals who are highly motivated to change their sexual orientation. Dr. Spitzer’s admission that his study was deeply flawed should discredit, once and for all, those claims of social and religious conservatives that homosexuality is not a fundamental part of human identity.
…
Critics have noted that the people interviewed [for his study] were nominated by centers that were performing the therapy and that there was no control group and no clear definition of what counted as therapy. There is also some evidence that reparative therapy can lead to depression or suicidal thoughts and behavior. It is absurd, potentially harmful, pseudopsychiatry.

It should have been rejected long ago.