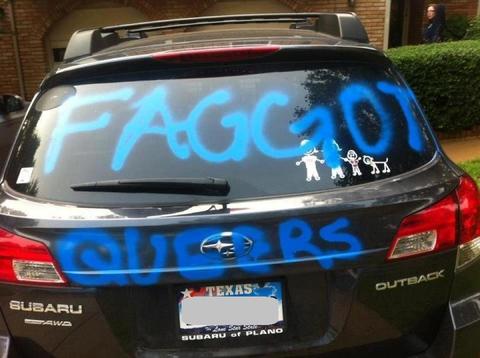 Police in Arlington, Texas, have arrested five teens ranging from 16-18 for their alleged role in over a dozen anti-gay vandalisms there.

From the local CBS News affiliate:

Police say while there were several victims in the case they believe one victim, as lesbian woman, was intentionally targeted because of her sexual orientation.

Police believe the vandals spotted a sticker on a car window that showed symbols of two moms, a child, and a dog.

“There’s an identifying sticker that you could associate with that type of sexual orientation and so we believe that once they saw that identifying mark that is what prompted, in our belief, them to spray paint these hateful messages,” Arlington police Sergeant Christopher Cook said during a press conference.

Police are treating the case as a hate crime. “We are committed in Arlington to prevent all crime especially crime that was committed for no other reason than possibly toward hatred," said Chief of Police Will Johnson. Johnson also said video footage helped nab the five men.

Human Rights Campaign president Chad Griffin told San Diego Gay and Lesbian News that Johnson and his team's swift action is "commendable." "They are not turning a blind eye to the anti-LGB factors involved – in fact quite the opposite. This is a shining example of law enforcement officials doing the right thing, and working diligently to ensure all members of the community they serve feel safe and protected."