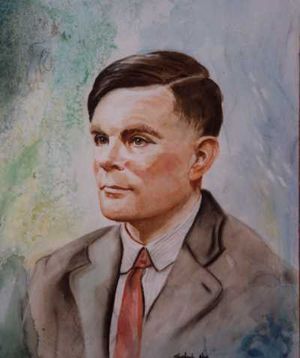 He was born in London and attended public school in Dorset, where he showed astounding aptitude for math. While there, he began some kind of relationship with fellow pupil Christopher Morcom, who shortly perished from bovine tuberculosis. The boy's death destroyed Turing's religious faith and cemented his belief in materialism, which would inform Turing's later work on computation and his musings on consciousness.

Turing went on to study at King's College, Cambridge, and at the Institute for Advanced Study, at Princeton, where he theorized what came to be known as the "Turing Machine." In 1938, Turing began work for the Government Code and Cypher School, where he concentrated on German Enigma machines — code-making machines, which in the coming years allowed German military commanders to believe their electronic communications were private. They weren't, because Turing's prodigious cryptological genius had broken the Enigma machines wide open. In particular, he had co-created the Turing-Welchman "bombe," a machine that could rapidly test interpretations of secret Nazi codes and discard false ones. By the end of World War II, there were hundreds of "bombes" in service, and Winston Churchill credited Turing with having provided the single greatest contribution to the Allied war effort.

In the late 1940s, Turing did pioneering work on early computers at England's National Physical Laboratory and the University of Manchester, where he began to think seriously about the nature of intelligence and how it might be emulated by a machine. His writings on the subject gave us the "Turing Test." Towards the end of his life, Turing's mind turned towards solving pernicious problems in plant biology, which he did.

In 1952, Turing brought home a trick: a young man named Arnold Murray. The two had several dates before Murray and an accomplice burglarized Turing's home. Turing reported the matter to the police, to whom he divulged the nature of his and Murray's relationship. As homosexual acts were illegal in England, Turing was charged with and convicted of "gross indecency," and given a choice between imprisonment and chemical castration. Turing chose the latter, and was forced to begin a regimen of synthetic estrogen injections. Turing's government clearances were revoked.

In 1954, Turing died of cyanide poisoning. It was likely intentional — he died eating an apple, which an inquest determined he'd probably poisoned — though Turing's mother insisted otherwise.

Since his death, Turing has been written about and lionized endlessly — almost guiltily. He's the subject of plays, movies, and biographies. Streets are named after him. The Alan Turing Award is the computing word's highest honor, and all modern computers can rightly be considered Turing's technological progeny. In 2009, in response to a petition by John Graham-Cumming, Prime Minister Gordon Brown issued this apology to Turing's ghost:

… The debt of gratitude he is owed makes it all the more horrifying, therefore, that he was treated so inhumanely. In 1952, he was convicted of gross indecency – in effect, tried for being gay.

His sentence – and he was faced with the miserable choice of this or prison – was chemical castration by a series of injections of female hormones.

… Thousands of people have come together to demand justice for Alan Turing and recognition of the appalling way he was treated. While Turing was dealt with under the law of the time and we can't put the clock back, his treatment was of course utterly unfair and I am pleased to have the chance to say how deeply sorry I and we all are for what happened to him.

Alan and the many thousands of other gay men who were convicted as he was convicted under homophobic laws were treated terribly. Over the years millions more lived in fear of conviction.

This recognition of Alan's status as one of Britain's most famous victims of homophobia is another step towards equality and long overdue.

But even more than that, Alan deserves recognition for his contribution to humankind … It is thanks to men and women who were totally committed to fighting fascism, people like Alan Turing, that the horrors of the Holocaust and of total war are part of Europe's history and not Europe's present.

So on behalf of the British government, and all those who live freely thanks to Alan's work I am very proud to say: we're sorry, you deserved so much better.

Google is celebrating Turing's birthday with a mathy, gnomic tribute-doodle that asks visitors to spell "Google" using binary, and to arrive at the binary characters using a kind of digital mockup of what appears to be a primitive Turing bombe. Try solving it! If you can't, seek instructions AFTER THE JUMP …