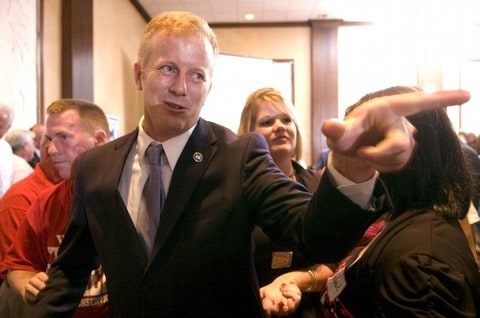 Most of us know Stacey Campfield as the Tennessee State Senator who championed the homophobic "Don't Say Gay" bill earlier this year. To the faculty at Vestal High School in New York, Campfield is an alum, and one worthy of being included in the school's Wall of Fame.

Despite protests from students, faculty and parents who oppose Campfield's discriminatory politics, the school says Campfield's picture will indeed remain on display.

"You may be surprised to know that we have heard from many, many people, including students, who understand and agree with our position [to keep the picture]," said school board President Kim Myers. "Many who feel intimidated and fearful to publicly state their approval for fear of being labeled a bigot or anti-gay. When you attempt to shout down opposing voices, who is the bully?"

Myers also told the gathered crowd that Campfield's picture was put up long before he became a voice for conservative causes, and also pointed out that the picture of another graduate wasn't removed after his name was tarnished. That student was OJ Simpson.