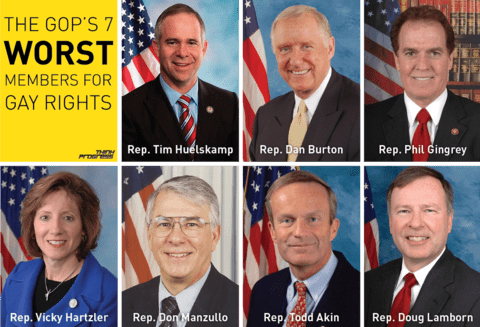 After an exhaustive and no doubt emotionally draining analysis, Josh Israel and Adam Peck at ThinkProgress have identified the seven most anti-gay Republican lawmakers in the House of Representatives. The number one offender, they note, is freshman Rep. Tim Huelskamp of Kansas.

The most anti-gay member of Congress has been freshman Rep. Tim Huelskamp (R-KS). As the author of his state’s constitutional amendment banning same-sex marriages and civil unions, during his previous tenure as a state senator, his anti-gay fervor in Washington is not unexpected.

He also co-sponsored three measures to criticize the Obama administration for not defending the Defense of Marriage Act, to direct the Speaker of the House to defend the law instead, and to delay implementation of the Don’t Ask Don’t Tell repeal.

The analysis involved going over various discriminatory pieces of legislation and tallying the sponsors. While 144 Congressmen have sponsored or co-sponsored exclusionary laws, these seven signed onto five or more proposals looking to limit LGBT people's rights.

There is one Democrat, Rep. Mike McIntyre of North Carolina, who co-sponsored an anti-gay measure: a constitutional amendment prohibiting marriage equality.