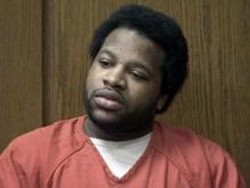 Their bodies were found last June buried behind a house on Ashe Street in Durham where Moses' mother, Sheilda Harris, used to live. Both had been shot in the head, according to autopsy reports…

…Authorities have said Pete Moses led a religious group of women and children who called him “Lord” and feared him. They lived together in a home on Pear Tree Lane in southeast Durham.

A woman who left the group told police that Moses killed Jadon in October 2010 because he thought the child was gay. Prosecutors said in court that Moses became concerned that Jadon had touched one of his sons inappropriately, and they said that he took Jadon to the garage and shot him.

The informant also told police that Moses ordered that McKoy be killed two months later when he learned she couldn't have children and wanted to leave the group. Prosecutors said she was forced back inside the house as she tried to run away and was later killed in a bathroom.

Moses accepted a plea deal sparing him the death penalty for the killings.

Watch WRAL's report, AFTER THE JUMP…