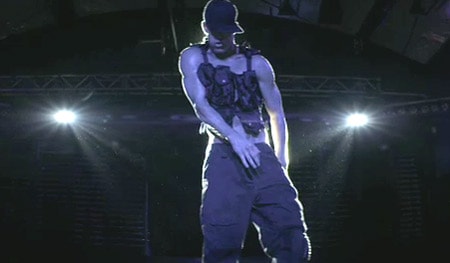 "You are the husband they never had. You are that dreamboat guy that never came along."

An exhilarating all night double date is winding down on a bridge in Tampa, just before the sun rises. MAGIC MIKE (Channing Tatum) stands up on the railing, looks over his shoulder and dives gracefully backwards into the water to the mild delight of the anonymous girls. His new protégé "The Kid" (Alex Pettyfer), already eager to follow in his new buddy's footsteps (and body rolls), jumps in awkwardly after him.

"Hey Mike, I think we should be best friends!"

The Kid blurts the invitation out with both of them bobbing in the water. He's like a little boy who's just discovered a whole new playground. It's a perfectly crush-worthy unguarded moment — the kind that makes you give yourself over completely to a movie. My heart is yours, movie. Treat me right.

This gem of a scene is also, as it turns out, the exclamation point to a perfectly formed Act One, "June". The movie takes place over the course of one life-changing summer for Mike and The Kid: June, July, and August. You go to Magic Mike to see seven spectacularly formed male bodies but the movie turns out to be all sculpted, too: June is introductions, flirtations and promise, by July you're deep in love/lust and too hot for clothing, and in August… Well, you know how sticky August gets. 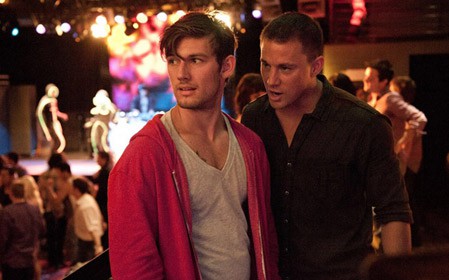 A word about the movie's shape, or physique if you will: If Magic Mike The Movie were a man, it'd be one of those average seeming guys who is suddenly a sex god once his clothes are off, annoyingly fit through the mystery of genetics without ever having to sweat or target a muscle group. All of which is to say that the movie's carefully sculpted form is initially hidden from view by its ultra casual posture. The movie feels improvised in nearly every scene though the quotable lines from a screenplay by Reid Carolin (who also plays Brooke's sort of boyfriend "Paul" in the film) suggest that it totally wasn't. Some of the movie's best laughs spring from its offhand observational manner like its disarming matter-of-fact introduction of "Big Dick" Ritchie. (Joseph Mangianello is looser and funnier as Ritchie than he's ever been as “Alcides” on True Blood, though not, unfortunately, more naked.) Some of Magic Mike’s best texture happens in the background where Ken (Matt Bomer) and Tito (Adam Rodriguez) are seemingly always engaged in inane small talk in very tight underpants. 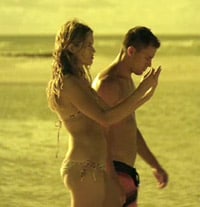 Oscar winning director Steven Soderbergh favors long takes here without cuts, which really puts you in the club, in the moment and with the actors. This ‘you are there’ atmosphere has obvious benefits in the movies frequent strip club scenes but it pays off in (slightly) more clothed scenes, too. When Mike pursues The Kid's uptight sister Brooke (Cody Horn) you're witnessing their entire wandering giggling flirtation which ends with a vision of such sun-dappled dreaminess that the movie theater is temporarily transformed into a sand bar party.

Soderbergh's trust in his star performer’s on camera ease and charm is repaid with the actor's best and most lived-in performance yet. The movie was loosely inspired by Channing's own brief stint as a male stripper five years before Hollywood came calling and to the star's great credit and our entertainment, he isn’t interesting in hiding his past, his feelings or his body. When Chan dives backwards into the water in that aforementioned Act One scene,  there's no opportunity to slip in a body double or stunt man as there are no edits whatsoever.

The same goes for the super authentic strip scenes. Though they have more editing, there are no body doubles, just bodies. Bodies by God… and personal chefs and trainers and seven hour daily workouts. 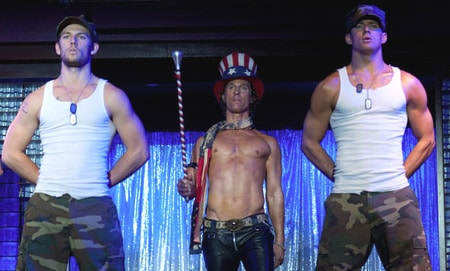 The amusing choreography, which gyrates around between big time and amateur hour, is presumably the work of Dallas (Matthew McConaughey), the club's owner and emcee. McConaughey gets the showiest role and finally finds that signature role that's alluded him all these years. Dallas may be a small time Tampa club owner but he carries himself like a stadium ready rock star with the conviction and charisma of a religious figure, the leader of his own Cult of Seven Thongs. While he's great and eerily serious about the autoeroticism once he finally takes center stage, the actor is even better in scenes where he's paired with the possible future versions of himself in Mike (the "star" he's groomed for years) and The Kid, who'll do if Mike is unavailable. His funny and very hands on pelvis on training of The Kid is the single truest snapshot of how game this entire cast is for self-exploitation, uninhibited comedy, and real acting, too.  It'd be Oscar Nomination #1 for McConaughey if anyone thinks to take a movie about male strippers seriously and doesn't mind the thought of an Oscar clip that contains glistening close up of the star’s glutes, somersaulting toward the camera. (In other words: That Oscar nomination will be very hard to come by.)

There are moments during “August” that you could argue fall on the wrong side of cliché and judgmental attitudes about Mike's "lifestyle" but even the movie’s most conservative character (Brooke, the love interest) has a distinct personality and Magic Mike never pretends that her inhibitions equal a lack of libido. Soderbergh makes the very smart decision to let us watch her watching Mike’s act and even if she’s uncomfortable with his exhibitionism, she’s obviously just as hypnotized as the next (far-more-inebriated) girl. She can’t pull her eyes away from him.

I think we should be its best friend and see it thrice. 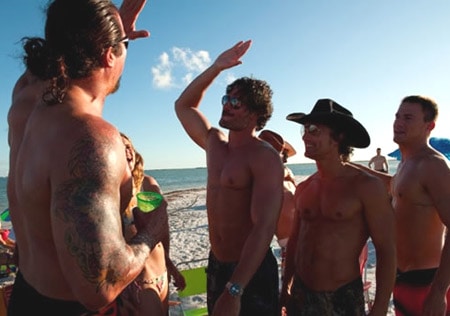 P.S. In what can only be called a summer miracle, Magic Mike and the Oscar buzzing original Beasts of the Southern Wild, both brand new this weekend, happen to be the two best movies of the year thus far. Do not miss either of them… it's a perfect weekend to hit the movie theater.