Minnesota's amendment to ban same-sex marriage, on the polls this November, is in serious troubleand faces mounting opposition, according to poll numbers released today by Public Policy Polling: 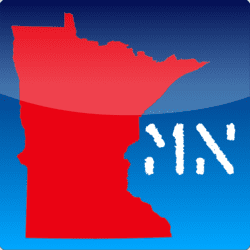 Minnesota's constitutional amendment to ban gay marriage now appears to be in serious danger of failing, a reversal from a PPP poll four months ago when it led for passage by a 48/44 margin.

Now only 43% of voters support the proposed amendment, with 49% of voters opposed to it. The shift since then has come with independent voters. After previously supporting the amendment by a 50/40 spread, they're now opposing it 54/37. Republicans continue to strongly favor the amendment (74/21) while Democrats are almost equally strong in their opposition (71/22).

Independents coming a lot closer to Democrats than Republicans on gay rights is becoming something of a constant in our polling. The GOP seriously risks antagonizing voters in the middle if it continues to pursue a far right social agenda.

Minnesota sees the same massive generational gap on this issue that we've found in other states. Voters over 45 support the proposed amendment by a 50/42 spread. But those under 45 oppose it by an even greater 60/34 margin.

Voters in the state think gay marriage should be legal by a 47/42 margin, closely matching the numbers on the amendment. And when you expand the discussion to civil unions 75% of voters support some form of legal recognition for gay couples to only 21% who think there should be none. That includes even 55% of Republicans.