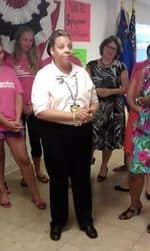 Pastor Pat is also the second African American woman elected to serve in the Nevada State Legislature. She is the current Stonewall Democrats of Southern Nevada Vice-Chairwoman.

Her victory in the Democratic primary means that she will serve representing Senate District 1 as there was no Republican entrant in the heavily Democratic district. Pastor Pat scored a landslide victory with votes from Nevadans who were just plain fed up with the Anti-Equality, Anti-Choice, Anti-Environment Senator John Lee.

The progressive coalition include the cream of Nevada’s activists. Planned Parenthood, Progress Now Nevada, PLAN Action and the Nevada Conservation League organized scores of volunteers and behind the scenes partners to take out one of the most right wing so called Democrats the progressive and equality movements have ever had to suffer.

Watch Spearman speak after the victory, AFTER THE JUMP…

Previous Post: « South African Man Beheaded for Being Gay
Next Post: ‘Obama Boy’ Has a Crush on Barack: VIDEO »