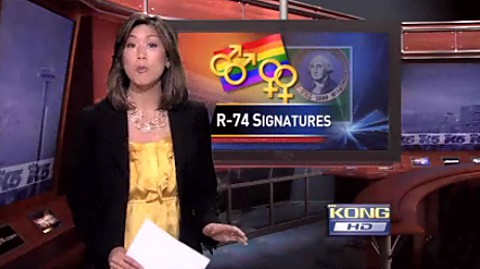 Today, Towleroad is participating in a moneybomb for Washington United for Marriage to counter efforts to overturn marriage equality in Washington state.

Any contributions are welcome. Click HERE or on the thermometer below on the right.

Seattle's KING5 says backers of the effort to overturn Washington's marriage equality law will turn in more than enough signatures to qualify a measure for the November ballot:

Joseph Backholm, with Preserve Marriage Washington, said Monday the campaign will turn the signatures in to the secretary of state’s office at 10 a.m. Wednesday. The campaign says it will submit more than 225,000 signatures, well over the number needed to qualify the measure for the November ballot.

The referendum seeks to overturn the measure allowing same-sex marriage in the state that was passed by the Legislature and signed by Gov. Chris Gregoire earlier this year. The new law takes effect Thursday unless opponents turn in enough signatures.

Backers of R-74 need to have 120,577 valid voter signatures by Wednesday to qualify for the ballot.

Watch KING5's report, AFTER THE JUMP…