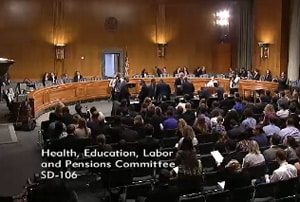 The Senate HELP Committee hears about employment discrimination against lesbian, gay, bisexual and transgender (LGBT) Americans. Chair Tom Harkin (D-IA) will also examine the Employment Non-Discrimination Act (ENDA), which would ban discrimination based on gender and sexual orientation in work places with 15 or more employees.

Recently, the White House angered LGBT advocates when it decided against issuing an executive order blocking same-sex discrimination by federal contractors. The Obama administration then came out in favor of ENDA, though there seems unlikely that the employment discrimination bill will pass in this session of Congress.

Here's another option for viewing with more background on witnesses.

Hearing is scheduled to begin at 10 am ET.