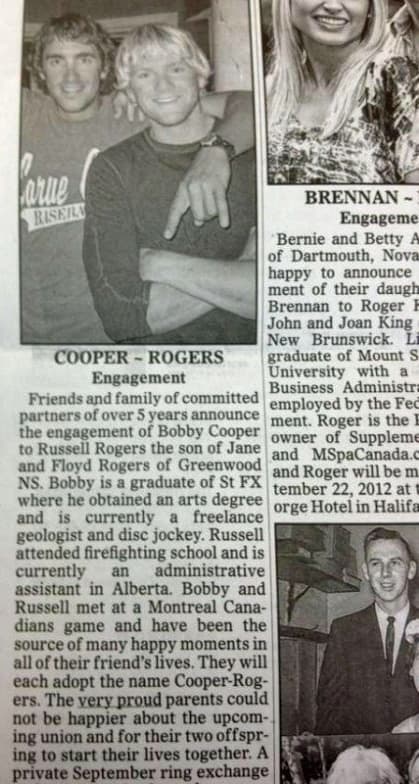 Someone decided it would be funny to send an announcement to Halifax's The Chronicle Herald regarding the wedding of Bobby Cooper and Russell Rogers. Unfortunately, Cooper and Rogers are straight and not getting married. The newspaper, unfortunately, never checked:

Bobby Cooper, one of the men featured in the announcement, issued a statement lashing out at the "prank."
"The announcement was placed as a poorly thought out prank from a friend that I feel should not have been approved by the staff at The Chronicle Herald without checking with one of us first,” Cooper said in the statement.

“I am a strong proponent of equal marriage rights for the LGBT community, and hate having my name involved in a prank that could possibly be perceived as making a mockery of something that the community had to fight towards for so long in Canada."

Cooper was not the only one to take offense at the ad. Leaders of the Halifax gay community were also unimpressed.