Yesterday, Andy reported on the testimony of Dorian Moragne, one of the three young men accused of beating up 20-year-old gay man Brandon White last February in Atlanta. Moragne insisted that he wasn't in a gang, that he "barely" hit Mr. White, and that he certainly didn't hit Mr. White because he's gay: 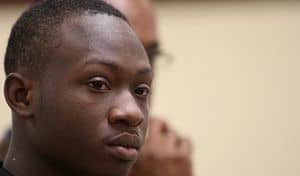 “This ain’t what y’all portraying it to be. This ain’t California. We don’t have a history of beating up gay people. All of this stuff you are putting on the media to say we beat gay people so you can pass a law,” he added.

"Y'all are the ultimate bullies, and you bullied somebody and you hurt him," Fulton County Superior Court Judge Jackson Bedford told the defendants. "To me there is no question you did it because of his sexual orientation."

With White looking on in the courtroom, the three defendants offered apologies for their actions.

"I am disappointed in myself because I know better and know right from wrong," Dareal Demare Williams said.

The AJC reports that Dorian Moragne, Dareal Williams, and Christopher Cain will perform "intensive" community service upon their release from prison, and undergo sensitivity training.

White's beating was captured on video — the cameraman, Javaris Bradford, has his own upcoming date with Georgian justice; for the moment he remains at large — and if you must, you may view that video here. The vid's audio certainly makes it sound as though White was beaten for his sexual orientation. Nevertheless, Mr. Moragne maintains that his cohort, Mr. Cain, was verbally provoked.