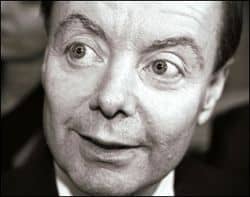 Just kidding. The culprits are Democrats and gays. RightWingWatch has helpfully transcribed the relevant bits (while kindly tidying up Mr. Bauer's grammar):

I'd like to go to Chicago for a second. I about fell out of my chair watching a recent CBS interview with Chicago Mayor Rahm Emanuel. He was lamenting the values, or lack of values, of Chicago's gang culture, as nearly three hundred people have been killed in Chicago this year, many of them little kids. That's higher casualties than we're suffering in Afghanistan. Here's what Mayor Rahm Emanuel said:

"It is about values. As I said then [referring to when a 7-year-old girl was shot and killed last month], who raised you? How were you raised? And I don't buy this case where people say they don't have values. They do have values. They have the wrong values. Don't come near the kids — don't touch them."

Well, thanks for speaking up Mr. Mayor, you're asking the right questions, but sadly you can't come up with the right answers. Certainly these kids aren't getting their values from their fathers because they don't have fathers in their households. For the past fifty years, Rahm Emanuel's party, the Democratic Party, has made it comfortable for many women to not have husbands in the home. Now Obama and the Democrats have embraced the radical idea of men marrying other men! How is that going to help the black family?

Mr. Bauer also took the opportunity to ridicule Mayor Rahm Emanuel for serving in the Clinton White House during the Lewinsky affair — and so, although it is old news, it may be worth remembering that Mr. Bauer's own presidential campaign, in 1999, was partially derailed by the departure from Mr. Bauer's service of several staffers disgusted over their (married) candidate's apparent improprieties with a young, blond female staffer.