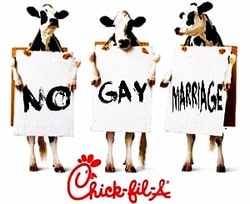 Facebook found a new member yesterday in a person claiming to be called "Abby Farle" and who promptly began using the social media site to defend Chick-fil-A, a company currently on the defensive after CEO Dan Cathy claimed marriage equality would bring "God's wrath" upon America.

The timing of the creation of Farley's Facebook page —  which specifically addresses the story's latest twist: Chick-fil-A's feud with the LGBT-friendly Jim Henson Company — had some people wondering if Chick-fil-A had made the page with the express purpose of defending itself. The company denies such accusations.

"I can confirm that Chick-fil-A has not created a false Facebook page of any kind. Our official corporate Facebook page continues to be our only one," said spokesperson Tiffany Greenway.

This leaves two other possibilities, as posited by Gizmodo's Casey Chan: "There's a chance that this could all be a stunt to shame Chick-fil-A—or an overzealous supporter." Or Chick-fil-A is lying.