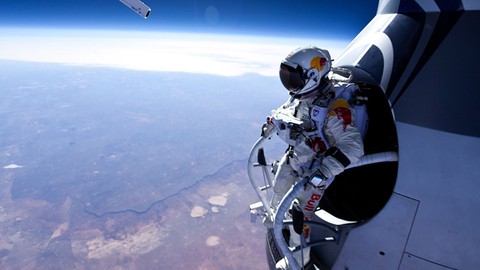 On his next mission, Baumgartner hopes to break both the record held US Colonel Joe Kittinger, who in 1960 dropped from 19 miles up, and the sound barrier. So what happens if a human body reaches that magic number — 690 mph — and barrels through the sound barrier?

Mike Todd, a technical engineer for the Red Bull Stratos mission that backs Baumgartner, was asked this question in 2010, when the sound barrier plans were first announced. His answer? It's unclear what will happen if Baumgartner hits his mark.

"We just don’t know what will happen to Felix and the suit when he goes supersonic," he told the New York Times. "Felix could slip right through it, but if half the suit’s supersonic and the other half isn’t, there could be turbulence that knocks him out of control."

We'll have to wait until Baumgartner's 23-mile jump next month to see whether he can break on through to the other side.

Until then, watch some footage of yesterday's jump AFTER THE JUMP…