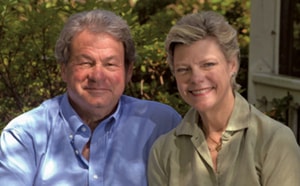 I missed this last week, but famed journalist Cokie Roberts and husband Steve penned a widely syndicated op-ed celebrating Rep. Barney Frank's marriage to Jim Ready, the nation's "evolution" on the subject and the possibility that the Supreme Court will hear cases on marriage equality:

A sample of the heartfelt piece:

We have known and loved Barney for a long time. He and Steve are from the same town in New Jersey, and it was Barney who recruited Steve to apply to Harvard and got him involved in student politics. Barney was an usher in our wedding in 1966. So it’s a special moment to celebrate his marriage almost 46 years later.
…
A supremely practical politician, Barney once worried that gay marriage was reaching too far and expecting too much from the political system. But he changed and so did we. We came to understand that Barney, like many other gay friends, wanted the same things that straight couples were searching for: a hand to hold, a heart to share.

It's a great read and I suggest you check it out. And a special thanks to reader Joe for sending this along!