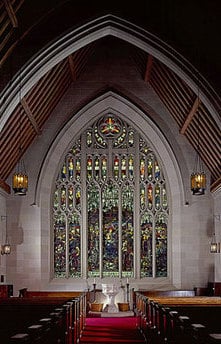 As expected, the Episcopal Church's General Convention's central prayer committee today approved of a resolution that would construct a liturgy to bless same-sex marriages, though there are still provisions for individual priests who object to marriage equality.

"No bishop, priest, deacon or lay person should be coerced or penalized in any manner, nor suffer any canonical disabilities, as a result of his or her conscientious objection to or support for the 77th General Convention’s action with regard to the Blessing of Same-Sex Relationships," reads an amendment attached to the proposal, according to MSNBC.

According to the press release, leaders within the church are aware they will have to hammer out an agreement down the road. "This is clearly a work in process, and there is a place in that process for all Episcopalians, whether or not they agree with the action we are taking today," it said.

In the proposed rites, each person would make a vow to the other, exchange rings and be declared "bound to one another in a holy covenant, as long as they both shall live." The resolution also asks that the liturgy be approved for provisional use starting the first week of Advent — beginning on Dec. 2, 2012 — and calls for a review process before the next General Convention in 2015. Congregations and clergy wishing to use the liturgy would need the permission of their bishops.

In states that currently allow same-sex civil marriage, such as Maryland and New York, Episcopalians may already bless same-sex marriages, but there is no formal church-wide liturgy. Commitment ceremonies for gay couples are allowed elsewhere in the church at the discretion of the local bishop.

The vote will now go to the House of Bishops and then the House of Deputies, a body that is open to lay people as well as clergy.

On a related note, the House of Bishops approved a resolution this weekend allowing transgender men and women to become ministers. That too goes forward for a final vote.