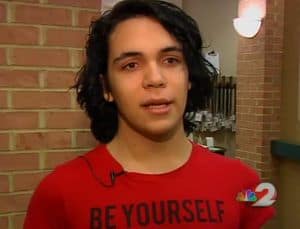 Let it be known: School districts can save a good chunk of change by not allowing gay kids to get beaten on their watch.

So learned Ohio's Union-Scioto school district, which includes the town of Chillicothe, where gay student Zach King suffered a beating at Unioto High last October. He was 15. The beating was captured on camera, went viral, and soon Zach found himself represented in a lawsuit by the ACLU. On Thursday, King, his mother, and the ACLU reached an agreement with the school district, according to which the district shall pay King and his legal reps "up to $35,000" and "improve its anti-bullying policies." From The Colombus Dispatch:

King and his mother, Rebecca Collins, claimed that school officials “fostered an atmosphere” that permitted the bullying of lesbian, gay, bisexual or transgender students while disregarding his reports of harassment.

“We hope similarly situated students don’t have to go through what Zach went through. The school district has made a commitment to try to avoid incidents like this in the future,” said James Hardiman, a Cleveland lawyer and the legal director of the ACLU of Ohio.

The school district’s insurer will pay $20,000 in damages to King and his mother, provide up to $10,000 in reimbursement for medical and counseling expenses and pay $5,000 in legal fees to the ACLU.

Through a lawyer, the school board communicated that they didn't feel they had fostered any kind of bully-facilitating atmosphere.