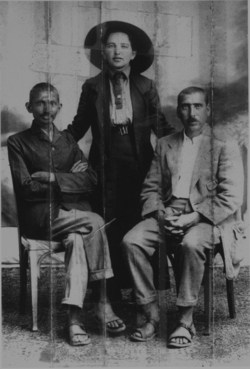 A biography of Mahatma Gandhi published last year described German-Jewish bodybuilder and architect Hermann Kallenbach the "love of his life," a detail that fueled speculation the iconic activist was into men.

The Indian government did not like this narrative at all and some regions even banned the book.

Well, the Indian government is going to even greater lengths to keep Gandhi and Kallenbach's relationship under lock and key. The Wall Street Journal reports that the government paid a bargain-priced $1.28 million to keep men's personal letters from going to auction. Obtaining the letters was deemed "a matter of highest priority."

India’s Ministry of Culture said this decision was made after experts who reviewed the archival material, mostly letters between the two men, recommended it should be acquired “as a matter of highest priority.”

The archive includes over 1,000 letters, documents and telegrams exchanged by the two men between 1905 and 1945, as well as several gifts Gandhi gave to Kallenbach over the years.

If the Indian government thinks this will erase those gay rumors, they've got another thing coming. Their urgency actually only raises eyebrows further, and without specific details from the letters themselves, the public's imagination is free to run wild. So, reader, let it run…