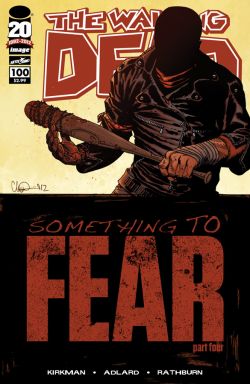 The Walking Dead, the comic book upon which AMC's television show is based, hit its milestone 100th issue today, and writer Robert Kirkman celebrated by finally introducing us to villain Negan, the murderous leader of a cult-like gang hellbent on ruling over the remaining humans. He's potentially even more dangerous than a swarm of zombies.

Without giving away too much (though there are perhaps a few minor spoilers here), I will say that Negan's villainy is more gruesome and startling than past foes like The Governor because of both Negan's rabid following and for the fact that he's clearly a homophobic sociopath. At one point Negan tells protagonist Rick he's going to make him into the proverbial "gay bitch," the quintessential, submissive "weakling," and thereby win his group's respect – or at least their cooperation.

If I recall correctly, the only other references to homosexuality over the past 100 issues of The Walking Dead have been rather incidental, as evidenced by the casual manner in which a gay couple was thrown into the mix.

Is Kirkman consciously presenting the series' most psychotic and dangerous villain as a homophobe? Does ignorance fuel hate? Is there a deeper message here? Knowing the tautness of Kirk's work, I would bet the answer is yes.

I've included an example of what I mean about Negan's remarks to Rick AFTER THE JUMP, but the comic's readers should be warned that you'll see Negan's face and a bit of what happens to Rick, Michonne and the others who went to warn a neighboring community that Negan was on his way.