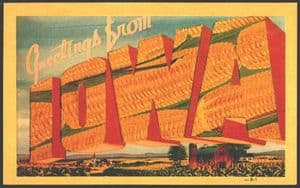 Iowa conservatives have been plotting to win back the state legislature and subsequently reverse that state's marriage equality law.

ABC News reports, however, that that homophobic ship may have already sailed.

Conservative lawmakers are watching public opinion move away from them on the gay marriage issue, and now fear that voters might not approve a ban even if the GOP can put one on the ballot by winning control of the Legislature in the November elections.

The shifting views come as a bitter disappointment for the state's prominent Christian conservative community which has long bridled at Iowa's status as a gay rights haven in the heartland — the only place outside the Northeast where gays can marry.

"People are getting comfortable with it and that's a shame to tell you the truth," said Susan Geddes, an Iowa Republican and social conservative organizer who worked for Mike Huckabee's 2008 presidential campaign in the state.

The Des Moines Register poll conducted last February found that 56% of Iowans oppose a ban on marriage equality. Meanwhile, a survey from 2009, the year Iowa's Supreme Court ruled a ban on same-sex marriage unconstitutional, found only 40% of Iowans opposed such anti-gay prohibitions, so clearly people are getting more than "comfortable with it."