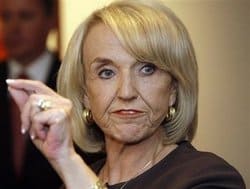 Two federal courts have said that withholding benefits violates the Constitution, so Brewer thinks the Supreme Court should get involved, as if it doesn't have enough potential gay cases on its plate.

Besides, Lambda Legal says it's too soon for SCOTUS to consider the matter.

Tara Borelli is a staff attorney with the Lambda Legal Defense and Education Fund, which filed the lawsuit challenging the law on behalf of gay employees.

She said it is inappropriate for the high court to consider overturning the injunction because the underlying case has not yet gone to trial. Borelli pointed out that the state has not yet introduced evidence about the cost-savings associated with eliminating benefits to same-sex partners, even though "that has been one of their primary justifications."

"This case is about equal pay for equal work," she said. "And we now have multiple judges who have looked at the case and have said Arizona simply has no good reason to deny important compensation for state workers that others can take for granted. We think this is about a desire to treat lesbian and gay state workers unequally."

Democratic State Rep. Matt Heinz, who is openly gay, blasted Brewer's decision last week, saying, "Since (Senate Bill) 1070 largely failed, Governor Jan Brewer decided to shift her efforts to legalize bigotry from one population to another." He's not the only state official who took umbrage with Brewer's overreach.

The Arizona Daily Sun reports that Edwin Leslie, a hotelier who Brewer appointed to a state tourism board, stepped down in protest. "Your actions … are in direct conflict with your reiteration that all Americans are entitled to the same 'inalienable rights,'" he wrote in his resignation letter. He also said that her actions will hurt Arizona's tourism industry.

He went on: "It is my hope that one day the state of Arizona leads the nation in extending benefits to LGBT families, allowing same sex marriage and adoption, and show that everyone is welcome in Arizona."

Brewer's office said it is "regrettable" Leslie "has opted to politicize his [resignation] in this manner." They also said Brewer's quest isn't about discrimination, but about reining in power Napalitano let run wild.

"[This] is about the authority of Arizona's duly elected officials to make budget decisions for this state," said the governor's spokesman.