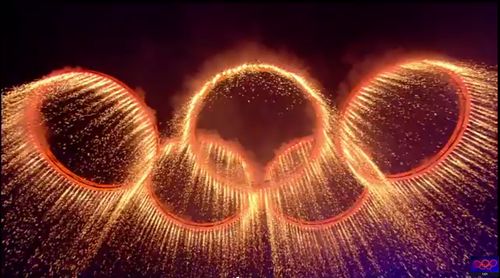 After an iffy start involving horses and pitchforks, last night's Olympic opening ceremony was dazzling. Sadly, NBC is being stingy with video. The bulk of the thing has yet to make it online, and what has made it online is un-embeddable. Hopefully that'll change soon. The lighting ceremony and subsequent fireworks show is very worth seeing, and is so far absent from the web.

In the meantime, please enjoy:

A clip from a segment of the ceremony celebrating British children's literature, in which Voldemort, the Queen of Hearts, Cruella DeVille, Mike Oldfield, and assorted nasty things menace a stadiumful of sleeping children;

A stirring clip of "the forging" of the Olympic rings (so called because that's what everyone's calling it, though nothing's actually being forged);

The Queen being escorted to the Olympics by 007. (The pair proceeded to jump from a helicopter, though NBC hasn't released that footage, either.)