After initially snubbing him because he was "afraid of saying something wrong", New England Patriots tight end Rob Gronkowski answered a couple of questions for Outsports' Cyd Zeigler at the ESPY's: 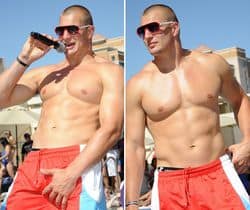 He gave me time for two questions.

“Have you ever played with a gay teammate?” I asked.

He thought for a moment and said he didn’t know of any.

“How would you feel if one of your teammates on the Patriots came out of the closet this season?”

This time he didn’t pause.

After all, if you're willing to "eff Tebow to take his virginity," you should be fine with a gay teammate.

Previous Post: « Towleroad Guide to the Tube #1166
Next Post: ‘Good Times’ Actor J.J. Walker: I’m Against Gay Marriage and I’ll Be Seen as an Idiot For It »