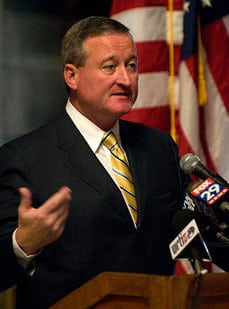 Philadelphia Councilman Jim Kenney isn't having any of Chick-fil-A CEO Dan Cathy's homophobia. In a letter sent to the conservative executive, Kenney told him to "take a hike and take your intolerance with you."

"As an American you are legally entitled to your opinion, regardless of how insensitive and intolerant it may be, but as a fellow American and an elected member of Philadelphia City Council; I am entitled to express my opinion as well," the incensed letter reads. "So please – take a hike and take your intolerance with you. There is no place for this type of hate in our great City of Brotherly Love and Sisterly Affection.”

Kenney's comments come after Chicago Mayor Rahm Emanuel backed a plan to block a new Chick-fil-A outpost from opening in the Windy City and Boston Mayor Thomas M. Menino vowed to stop the franchise's expansion there. 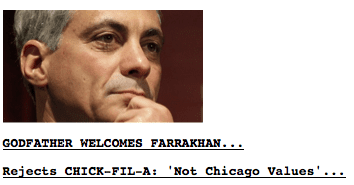 Meanwhile, there's a change.org petition trying to boot Chick-fil-A from the University of Kansas campus. Also, with regard to Emanuel's aforementioned opposition to Cathy and Chick-fil-A, conservative aggregator Matt Drudge currently has the following image and headlines at the top of his influential page.

The pairing implicitly suggests that Emanuel's pro-equality politics are somehow associated with the anti-semitic and racist rhetoric that comes out of Louis Farrakhan's Nation of Islam, which, by the way, is also homophobic. The two stories – one of which is about how NOI activists are joining a campaign to end gun violence – are unrelated, though Drudge would like readers to think otherwise.

Finally, Human Rights Campaign and its allies today picketed outside a Chick-fil-A food truck in Washington D.C. Here's an image from the protest. More on that later. 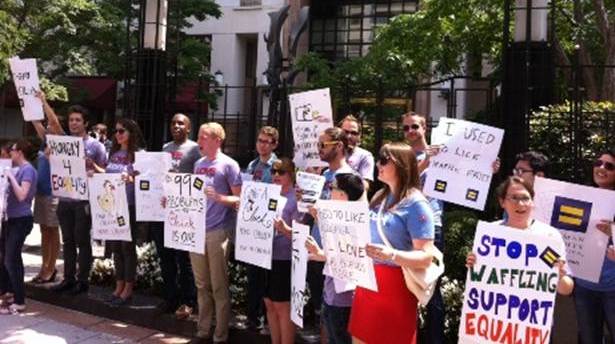