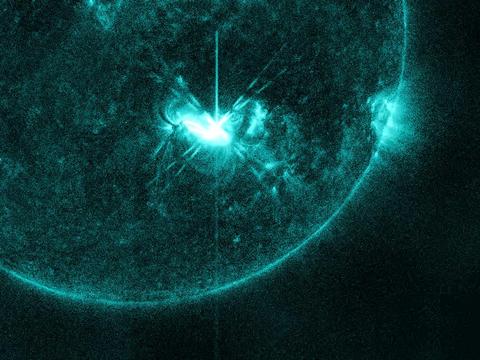 If you don't look at NASA's image of the day on a daily basis, you should.

Sure, some of the images can be less exciting than others — ie: image of a space shuttle image versus Saturn's rings — but more often than not the space agency offers viewers a glimpse into the cosmos. Today's image is a solar flare our fair sun belched forth on the Fourth of July.

This image, captured by the Solar Dynamics Observatory, shows the M5.3 class solar flare that peaked on July 4, 2012, at 5:55 AM EDT. The flare is shown in the 131 Angstrom wavelength, a wavelength that is particularly good for capturing the radiation emitted from flares. The wavelength is typically colorized in teal as shown here.

As gorgeous as this image may be, scientists warn that an uptick in such solar ejaculations could clog our electrical grids here on Earth, as in fact this current flare up did.