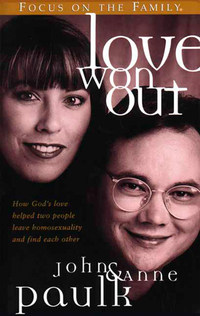 A few months ago John Paulk, the former chairman of "ex-gay" group Exodus International and a poster boy for the movement, changed his Facebook page to say he's "interested in men and women."

Now the LGBT group Truth Wins Out reports that John and wife Anna, another activist in the "ex-gay" scene and John's co-author on Love Won Out, are splitting up and that Mr. Paulk has been dating men.

Sources tell Truth Wins Out today that John has moved out of the couple’s Portland, Oregon home. Other sources in Portland have informed Truth Wins Out that Paulk was dating a man, although the current status of that relationship remains murky, and that Paulk has frequented homosexual establishments in the city.

Paulk also recently penned a Facebook message about his wedding date, writing, "Although a lot has occurred since that day long ago and I am on a hard journey right now, I want this woman to know how much she has always meant to me and that no matter where things pan out."

You know that song "Things That Make You Go Hmmm"? This is it in action.

Previous Post: « New Kids On The Block In The Shower With Mustaches: PHOTO
Next Post: New Design for NYC AIDS Memorial Approved: RENDERING »