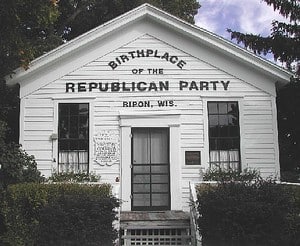 As state Republican camps craft their specific platforms, and as states diverge on the topic of marriage equality — the Texas branch claims the "practice of homosexuality tears at the fabric of society," while the DC GOP last week included equality in its policy document — Pema Levy at Talking Points Memo predicts culture war fissures among the party as a whole.

No other GOP state party platform has gone as far [as DC's]. But as state parties draft new platforms this year, the GOP could likely end up with state parties that run the gamut from planks firmly opposing gay marriage to others that endorse it.

Indiana Republicans ended up somewhere in the middle. The state Republican Party removed anti-language in its platform earlier this year, and no longer has a stated position on gay marriage. Though it does not endorse marriage equality, the removal of its opposition to the institution represents a step in that direction. The shift pleased LGTB activists and angered social conservatives.
…
“We’re the first spark,” [DC Log Cabin Republican head Robert] Turner said of D.C. He pointed to Indiana as another example of a state GOP making progress on gay rights. “It’s small steps, each year we reach more and more people. So the next time we have these platform committee meetings, there’s a strong possibility more states will adopt similar language.”

Who out there is holding their breath?

Previous Post: « Music Mogul Russell Simmons Reacts To Frank Ocean’s Coming Out: ‘We Love You’
Next Post: Model Renato Seabra, Accused Of Murdering Celebrity Boyfriend, Claims God Made Him Do It »