On June 6th, U.S. District Court Judge Barbara Jones ruled that the Defense of Marriage Act (DOMA) is unconstitutional in the Edith Windsor case, brought by the ACLU. The case awaits a second round in the 2nd Circuit Court of Appeals. 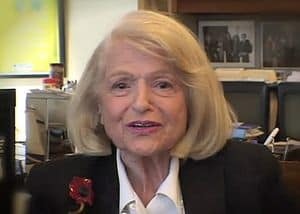 Today, the HuffPost reports that Windsor's attorneys have petitioned the Supreme Court to hear the case, making it the third involving DOMA that could be considered by SCOTUS as soon as next spring.

Roberta Kaplan, Windsor's lawyer, said that Monday's petition to speed the lawsuit's movement through the courts was due in part to her client's age and health. Windsor has a heart condition, and on June 13, after the Bipartisan Legal Advisory Group filed a notice of appeal, Windsor filed a motion to expedite the latest appeal, citing her poor health and a desire to "see the constitutional claim of her spouse's estate resolved during her lifetime."

In the petition to the court, the lawyers argued that the case is a straightforward example of how DOMA financially impacts married same-sex couples.

More on what the ACLU's petition means with regard to the Obama administration's strategy on DOMA from Chris Geidner over at Buzzfeed.