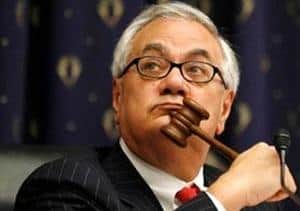 For months Democratic leaders have throwing their weight behind a party platform that includes marriage equality. Officials ranging from House Minority Leader Nancy Pelosi to former DNC Chair Howard Dean, as well as dozens of elected officials have said they support such an amendment.

Now that the platform drafting committee has been announced, Chris Johnson from The Washington Blade did a little asking around to see who is and who is not supporting an official party endorsement of same-sex marriage.

"Like the President, I believe people should come before their government as equals,” said Governor Patrick. “In Massachusetts, that has meant that people can marry whomever they love. I am proud that marriage equality is the law of our Commonwealth and appreciate that other states are moving in that direction. While I do not believe that marriage is or ought to be the subject of federal law, I support the proposed plank as an expression of human rights for which the Democratic Party stands.”

The other ten members of the official committee have yet to take such a forceful stand. And, yes, that includes openly gay and recently married Rep. Barney Frank.

Eric Orner, a Frank spokesperson, said the lawmaker, who earlier this month wed his partner, Jim Ready, said the Massachusetts Democrat isn’t yet ready to speak about marriage equality in the platform.

In an April interview with the Blade, Frank expressed lukewarm support for the idea of marriage equality in the Democratic Party platform, saying he “would like it,” but thought support for repeal of the Defense of Marriage Act would be more important for the platform.

“The only federal question is DOMA,” Frank said. “The federal government doesn’t have a rule about marriage or not, so I would want there to be a plank that says, ‘We respect the right of states to make this decision.’ I think what’s important from the federal standpoint is to go out against DOMA.”

Considering the president's support for marriage equality and how enthusiastic other Democrats are about the issue, it's more than likely the Democratic Party Platform will include inclusion. How much, of course, remains to be seen.