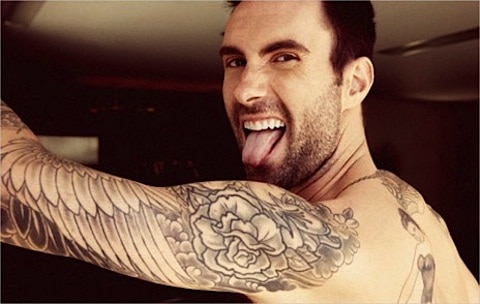 Adam Levine talks to Chris Azzopardi at Pride Source about his gay brother, The Voice, and why he's said if he were President he'd legalize same-sex marriage first:

It's just so silly and it doesn't make any sense to me that you wouldn't be able to marry whomever you want to marry. It's not our business. I don't know why we're obsessed with making everything in this country our business, all the time. It seems we're a little behind on that, and we just need to make it legal and stop caring so much. It doesn't matter. And it shouldn't matter…

…People have their personal preferences as to what they want to do with their own lives, and they have every right to do that – just like a gay couple has every right to do that. It's just not anyone's business except the people involved. That's all I would say: "What makes you better than these people?"

People have a million different justifications and reasons why they don't want (gay marriage) allowed, but it doesn't check out. Whenever I hear people's reasoning behind it, I think to myself: First of all, marriage isn't always successful anyway. Look at the divorce rate and all the things that go wrong with marriage. Whether it's gay or straight, there are issues with it. Clearly people have a hard time staying together, and that's just a sad truth about marriage in our society. People should be allowed to succeed and fail at marriage as they so desire.