Andy reported Tuesday on the police attack on and subsequent arrest of 44 gay activists in Harare, Zimbabwe, who were meeting peaceably to discuss past infringements of their rights by police. The activists were members of Gays and Lesbians of Zimbabwe, or GALZ:

“Four police officers attempted to gain entry into the premises before calling for back up where about fifteen (anti) riot squad members descended on the office and effected arrest. Thirty one men and thirteen women members were detained overnight at Harare Central Police Station on 11 August 2012.”

Galz claimed that some of the police officers appeared drunk and assaulted most of the members using baton sticks.

“Police, some of them visibly drunk, assaulted most of the members using baton sticks, open hands and clenched fists before detaining them without charge. Such use of force is in direct contradiction to the Global Political Agreement,” Galz said.

Now, Zimeye reports that both the American embassy and the diplomatic delegation from the European Union have condemned the assault: 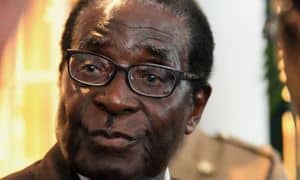 “The targeting and abusive treatment of non-governmental groups by members of the police is deeply disturbing part of life in Zimbabwe,” the US Embassy in Harare said.

“Too often, the Zimbabwe Republic Police becomes an instrument of political violence for use against citizens exercising their democratic rights, rather than maintaining its proper role of the people’s protector and guardian of law and order.”

The EU welcomes President Mugabe and Prime Minister Tsvangirai’s recent public calls for peace and for people to avoid resorting to violence. We encourage all Zimbabweans to join these unambiguous calls against violence and violations of human rights.

Zimbabwean president-for-life Robert Mugabe has famously declared that gays and lesbians are "worse than dogs and pigs." He's also insisted that homosexuality violates womens' rights and leads to the eventual extinction of the species, and he once jailed a fellow politician for suggesting he, Mugabe, might be gay.

Previous Post: « Maybe The Most Comprehensive Map In The Universe: VIDEO
Next Post: Patti Smith And Russell Crowe, Blowing Minds In Reykjavik: VIDEO »