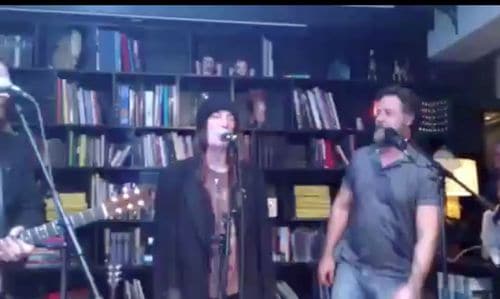 Russell Crowe's a busy dude. He's in Iceland at the movement to shoot a film called Noah, but yesterday he took a break from his on-camera work to perform not one, not two, but three brief rock'n'roll concerts around Reykjavik, perhaps in celebration of Reykjavik's annual "culture night."

He was joined onstage by his friend, the musician and actor Alan Doyle, and during his latter two appearances Patti Smith made a cameo, driving the crowds into a totally justifiable frenzy. AFTER THE JUMP, see Smith join Russell and Doyle in the intimate bar at the KEX Hostel, performing "Because The Night." Patti's godlike.

Previous Post: « EU, USA Condemn Arrest Of Gay Activists By Zimbabwean Police
Next Post: Manhattan Businessman’s Last Will And Testament: My Son Will Get Straight, Or My Grandkids Get Nothing »