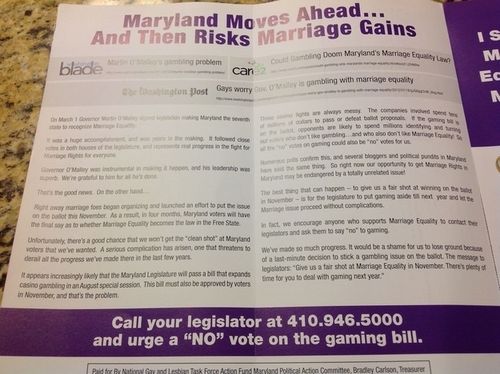 Buzzfeed's Chris Geidner tries to get to the bottom of a mailer the National Gay and Lesbian Task Force sent out to Maryland Democrats, funded by an anonymous donor:

Depending on how many mailers actually were sent — there are more than 1.8 million registered Democrats in Maryland — the mailing could have cost hundreds of thousands of dollars.

The Task Force has refused to name the source of the significant amount of money required to produce the mailing, and would not respond to questions raised about whether the money came from an anonymous source outside of the organization, instead only providing a response from its acting executive director, Darlene Nipper, that the effort was "funded by the Task Force Action Fund."