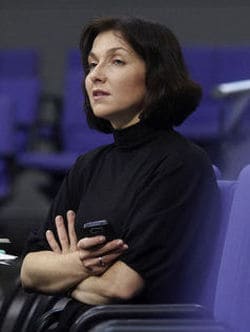 Sweden's The Local has more on the comments made by Reiche, a member of Chancellor Angela Merkel's ruling Christian Democratic Union:

What [Reiche] called, “this demographic development”, was “next to the euro crisis, the biggest threat to German prosperity.”

Merkel's Union must, Reiche added, “clearly state that it backs the idea of family, children and marriage, and that society is not held together by small groups but from a stable centre.”
…
Certain critics, local paper the Berliner Zeitung said, have revelled in pointing out the hypocrisy in the fact that Reiche herself had two of her three children out of wedlock, while others have taken to Facebook to air their disappointment.

And despite Reiche taking her own Facebook page down after it was flooded with angry comments, some 6,000 gay marriage supporters have moved to a group made specifically for the Berlin-based politician, called No Future with Katherina Reiche.

The comments on that page definitely pull no punches. A letter from organizers reads, "We expected more from you, because thanks to your illegitimate children you know that 21st century family does not automatically mean “husband + wife + children… Your statements are a slap in the face for all families that do not conform to your idea of normal."