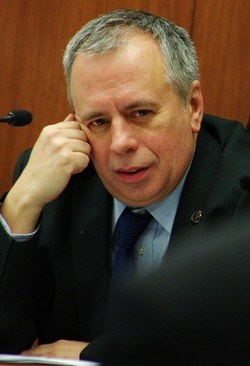 Kerry Gauthier, a member of the Minnesota House of Representatives since 2001, has ended his reelection campaign after being caught having consensual and legal encounter with a 17-year old at a highway truck stop, largely due to pressure from his fellow Democrats.

Having admitted the encounter, and facing no criminal charges at the moment, Gauthier said his self-denial led to his "mistake."

"I am sorry for the hurt this has caused my family, friends and my constituents. I know I made a mistake and am determined to make amends as best I can," he said.

Gauthier [said] his unwillingness to accept he is gay led him to the act. He said he is getting counseling. He also said he feels badly for the teen and wouldn’t talk specifically about the incident to protect the boy.

"I can change my behavior, but I cannot change the fact that I am a gay man, and have known this since my college days. I simply must act like a mature gay man would act, and not as the incident portrays me."

Governor Mark Dayton said pressure on Gauthier to step aside wasn't about the same-sex aspect of his tryst, procured with a Craigslist ad, but was about "morals".

"I think it’s just something that goes beyond the morals of Minnesotans – to solicit on Craigslist sex with a minor and do it in a public area, publicly owned area, as a state legislator, and come back to the parking lot with his clothes disheveled," he said, according to EDGE. "It’s not about whether it’s a same-sex or a heterosexual act. It would be the same if it were the same circumstances involving a heterosexual individual."