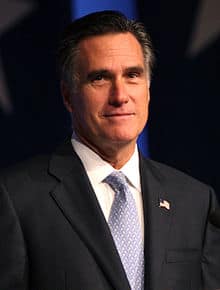 In an interview for the forthcoming issue of Fortune Magazine, Mitt Romney explained (finally!) some specific things he'd do as president of the United States. Some of his plans were excellent, though outside the actual bounds of presidential power. (Presidents cannot, say, single-handedly will an American return to industrial dominance.) Presidents really do have extraordinary control over the United States' federal budget, however, so it's worth taking Mitt seriously when he says:

… there are programs I would eliminate. Obamacare being one of them but also various subsidy programs — the Amtrak subsidy, the PBS subsidy, the subsidy for the National Endowment for the Arts, the National Endowment for the Humanities. Some of these things, like those endowment efforts and PBS I very much appreciate and like what they do in many cases, but I just think they have to strand on their own rather than receiving money borrowed from other countries, as our government does on their behalf.

At WashPo, Ezra Klein why this won't actually save very much money, though it'll certainly delight math-impaired deficit hawks.